On Friday morning I woke up to an interesting email that read, “Please call me ASAP about appearing on the Poker Night in America TV show”. It was signed and had all the contact information for Nolan Dalla who is the Media Director for the World Series of Poker. I was already familiar with him and the concept for this new TV show so I called him for more info.

Basically the show which premieres in April will be a bit different than poker shows in the past have been. Yes, it will still show the action from a game but it’s also part reality show in that they want to focus on the people who play the game and the interesting backgrounds and stories that they have. Thus the call for me to appear on the show.

After talking about it and thinking/praying about it over the weekend I decided for a couple of reasons not to appear. When I let Nolan know my decision he was very gracious and still invited me to come to the taping to see what it was like and to meet and mingle with some of the players. That I decided to do so I took a couple of hours yesterday to drive down to Baltimore to check it out. To follow are some of the pictures I took along with some comments. 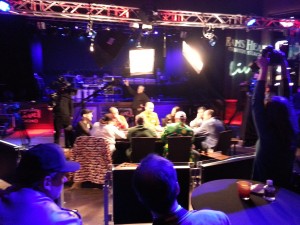 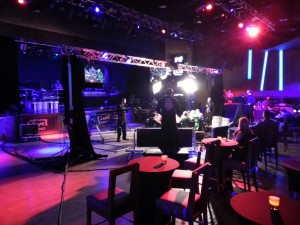 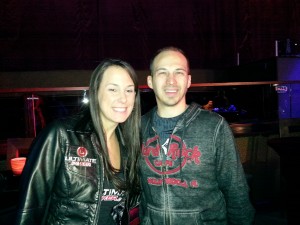 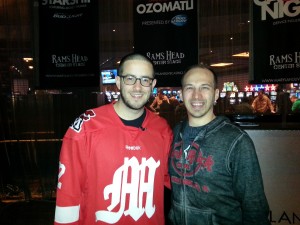 I was just as fascinated by the production side of things as anything else. Learned a couple of ideas to make my videos even better. This particular shoot was going on for 12 hours. Players were rotating in and out but some of the names included Greg Merson, Jason Summerville, Danielle Andersen, David Baker, Gavin Smith, Matt Glantz and apparently Olympic Swimming champ Michael Phelps showed up shortly after I left.

Nolan is the guy standing in the middle of the 3 guys in picture 3. The female I’m pictured with is Danielle Andersen. She was one of the stars of the movie, “Bet, Raise, Fold“. Lisa and I watched it a few months back and it’s sort of like what this TV show is about…ordinary people, in this case a woman who’s husband taught her the game and she excelled while raising a family in Minnesota. She seemed so nice in the movie and she was no different in person.

As for the guy I’m pictured with, that is 2012 Main Event Champion of the World Series of Poker, Greg Merson. Greg is from the Baltimore area and 2 years ago he outlasted 6598 players to take home over 8.5 million for his WSOP win. He was very gracious with his time with me and had some kind words.

I had a great time and was grateful for the opportunity to see the behind the scenes of something I’ve only ever seen on TV. I was able to share my story with a few people and hopefully I was able to burst some of their preconceived notions of what followers of Jesus are like. In fact one person commented, “You’re really funny, I didn’t expect that from a pastor”. I think it’s pretty cool that my hobby is more and more becoming a platform to share my faith. Who knows, maybe soon I’ll be able to do that on TV. They will more than likely be shooting again this summer in Baltimore and Nolan has already invited me to come back to again observe or if I want play… we’ll see.